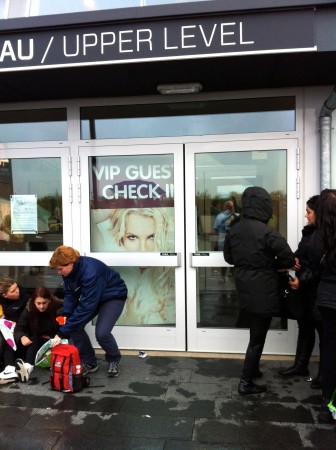 The backstage tour before Britney’s concert in Herning was pretty awesome.  Unfortunately, we were not allowed to take pictures during the tour.

I arrived fairly early (4 pm, warm up at 730 pm, and concert start at 9 pm) and there were only a few other dedicated fans.

Britney’s music was, of course, playing from multiple cell phones.  I had just switched my ring tune to I Wanna Go, ((You should totally watch the video, it is awesome and Britney looks really pretty – I really love her smile in this one.)) so that was plenty confusing.  Also, it is very ironic to listen to Big Fat Bass played on a cell phone.

I had arrived “late” as I didn’t have to stand in line.  The commoners had to enjoy the rain for another two hours; I only had to wait 25 minutes and head thru this entrance: 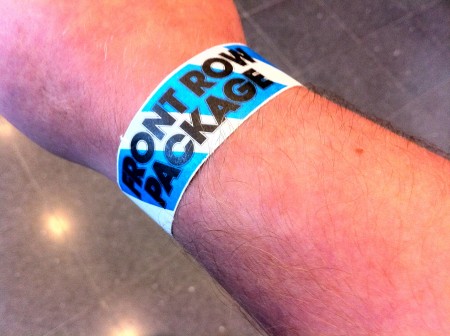 We also received some tacky backstage chain, our ticket, and some pretty girls were handing our perfume samples (Britney’s Radiance), and were very much in doubt about whether to hand me one.

As mentioned, we were not allowed to take photos ((Under threat of being thrown out…)), so I don’t have any from the actual backstage tour.

The tour was pretty awesome, though.  First we got to watch the danseurs rehearse.  We were told random facts about the concert (for example, they use enough light to light up a city with 25000 inhabitants).

On the way behind the stage, we ran into Destinee and Paris, who were the warm-up for Britney (or, the second warm-up, really – the first was some crappy Danish singer).  They so nice to sing their True Love for us; an awesome little “concert” for just the 40-50 of us.

We then went backstage and saw some of the props (and several miles of cables).  We also got a glimpse of Britney’s dressing “room” below the stage.  After that, we went into the wardrobe and saw some of the costumes (I’m quite impressed by how much attention to details is paid to the costumes; for example, the dress Britney wears during Toxic is a kimono with the word Toxic written in Japanese).

We briefly met one of the musicians and Britney’s father, and went back to the front.

The tour was around an hour and a half, up from the promised 30-45 minutes, so that was awesome!  After the tour, the “regular” VIPs found spots in front of the stage: 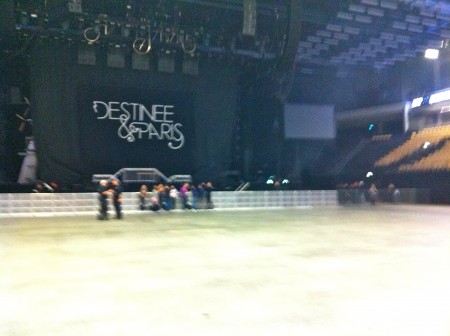 It was quite fun to see the venue almost completely empty.  The VVIPs (who had meet and greet tickets instead of “just regular” backstage tickets) got to our reserved seats.  From there, I had a good view of the people I had seen outside earlier entering the venue: 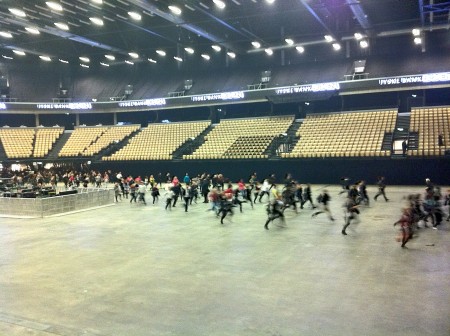 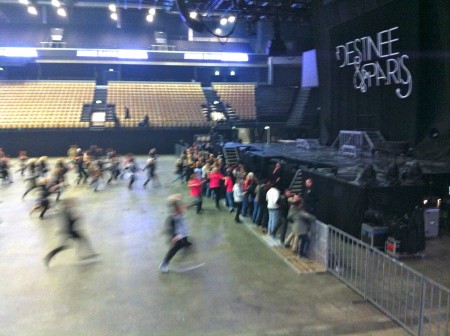 From my seat, I also got the only picture of backstage: 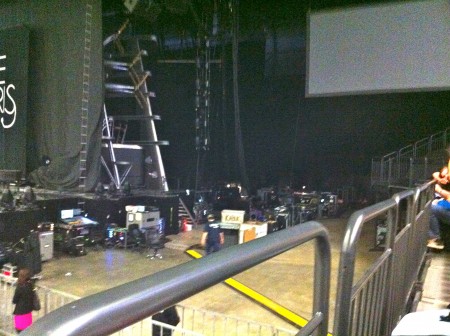 Doesn’t really give any impression of the awesome of the tour.

Looking forward to a redo next week.  I hope it’ll be just as awesome!  Even though it won’t end in a M&G, at least I get early access to the golden circle, so I should get a good view!

I’ll post concert pictures when I get them sorted out.  And there’s a lot, so it may take some time.  Or a boring meeting…

One thought on “Backstage Before Britney in Herning”