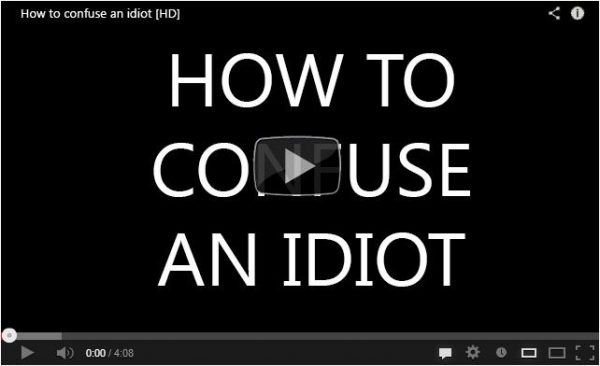 I don’t really watch TV; haven’t really in 15 years.  The format bores me and tends to put me to sleep.  Lately, Youtube has improved to the point where there’s genuinely good channels that consistently put out content worth watching.  Here’s a bunch I like.  I’ve separated them into 3 categories: nerdy general (heavily leaning towards STEM) knowledge shit, nerdy computery shit, and general funnies.

There’s a ton of channels in this category; it’s basically shitty internet listicles, but in video form.  Also, I prefer the ones that put out real knowledge in a well-produced manner.

The Today I Found Out channel provides daily videos with little facts, such as why tooth paste makes OJ taste terrible, why Coca Cola launched New Coke, and a special containing 25 funny facts.

Their videos are well-produced and often interesting. Just funny facts you can add to your quiz background storage if you’re into that, or just watch and forget.

Vsauce is one of many science education channels. Instead of teaching things boringly, they typically pull out weird topics and go thru them in very interesting ways. Aside from Veritasium below, there’s also honorable mentions such as Standup Maths, Smarter Every Day, Minute Physics, and my alma mater’s own Fysikshow.

Vsauce dives into topics typically on the STEM side of things, with a great introduction to the Banach-Tarski “paradox” (or how to make two solid balls of the same size from just one), a video about Zipf’s law (or how the frequency of almost everything is predictable), and a video about Juvenoia (basically where does “kids these days” come from?). The creator has just announced a series of live shows together with MythBuster’s Adam Savage and launched a RedTube (or whatever the paid Youtube is called) series with even high production values called Mind Field, where he looks at human behavior (the first episode is free and worth checking out).

Veritasium also tries bringing science education into the 21st century, and does so pretty well. Updates have been very sporadic lately, but has a great catalogue including topics such as physics, including the roundest object and how it is used to try and redefine what a kilogram is, an introduction to the scientific method by a single poll, and an entire playlist of videos investigating misconceptions, such as why the most venomous animals live in hot climates (they don’t) or where trees get their mass from (it’s not the Earth).  Veritasium also did a great (large unrelated to their channel) video about Facebook likes.

Numberphile is super-charming in its own way. It’s a number (ha!) of turbo-nerds getting way too excited over numbers. Everybody knows Douglas Adams fans get a raging nerd-boner from the number 42, and this video explains why and other cool things about the number, a video about 5040, which is very far from being a prime number, but also videos that just dig into interesting problems, like this one about the Monty Hall problem (the prize behind one of three doors) or a demonstration of Gauss’ Theorema Egregium in relation to pizza, or just plain outrageous things like this elliptical pool table.

The same guys also have other channels I’ve put less time into, like Computerphile, Psyfile, Periodic Videos, and Philosophy File.

Captain Disillusion is about special effects. His show format is (on purpose) looking like a children’s show, but the contents are really informative. He typically displays a viral video and shows how it was done using special effects. For example, he has a video about “the dress”, a video about a water trick, and a video about videos with amazing lightening strikes. He also shows how a certain Kickstarter campaign is using effects to fake a product that not only doesn’t exist, but cannot exist with current technology.

Debunking videos are a big thing, and if you like that, Thunderf00t has a good playlist about that (but you want to stay within that playlist because the guy has some questionable opinions about women and in general sounds like an unlikable condescending twat), as does EEVBlog (though he also gets a bit too know-it-all after a couple videos). Retsurprae is mostly making fun of crowdfunding, as does iDubbbz if you can stomach him.

Retro tech is also big.  It’s like those insufferable twats claiming vinyl is better than iTunes Music or that steam engines and dumb goggles are somehow the shit (that’s actually a subculture, yes), except updated for a new decade: channels featuring tech from when I was young.

LGR started as so many recent channels doing Let’s Plays, but moved more into featuring computers from the 80s and 90s. He uploads videos twice a week, and has a couple sub-segments such as Tech Tales, where he goes into the history of the rise and falls of giants in the industry, for example Osborne (for which the Osbone effect is named), Oddware, where he features really weird, mostly ancient, technology like these Sony TV glasses, or his many reviews of old games – here, for example, DOS games – such as a review of DOOM.

Honorable mention in this category goes to Techmoan.

In this category are other channels I find amusing and which are far less nerdy than the above.

The Katering Show pokes fun at foodie trends. It features two Australian comedians, Kate McCartney and Kate McLennan, in a seemingly standard cooking show setting. McCartney is presented as food intolerant and McLennan as the foodie trying to work around McCartney’s allergies while keeping up with the latest food trends.

Internet Comment Etiquette is hard to place. The concept of the channel is teaching how to leave meaningful comments on the internet, while showing off how terrible the internet is. The show has a lot of in-jokes developed during the run-time so watching in order is advised. Otherwise, just flow with recurring themes like tweets to Ted Cruz, bouncing on my boy’s dick, Skjöldr, YouNow, Salvia, sweating, and the host’s robot son. It’s infantile as hell, but somehow clever enough to amuse me to no end.

Eric, the host, typically shows a category of videos and the types of comments on them, then leaves even worse comments. His channel banner is a result of a video on optimizing channels (and the subsequent de-optimization). Videos include topics such as news sites, Alex Jones, getting medical advice from the Internet (including sex education), and impromptu segments like web-site spotlight (the “segments” are typically quite high-effort one-offs which are quite different than one would expect).

So, that was my list. I’ve mostly stuck to things that I have watched for quite a while and still keep watching. Let me know if there’s anything else I should watch. Try to also explain why so it’s not just a like to a funny video.