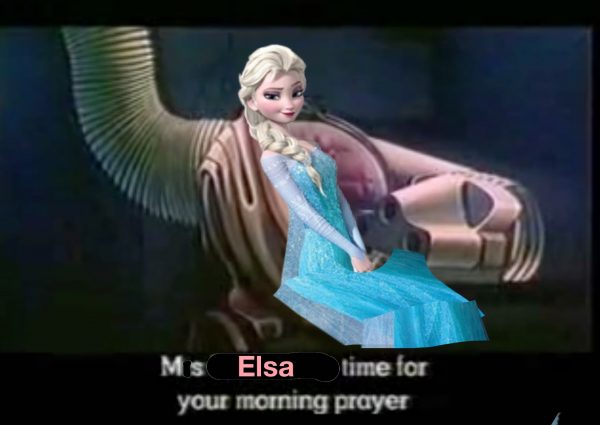 Everybody knows that Frozen 2 tanked in the cinema; I should know, I only watched it twice. Maybe that’s what the two refers t(w)o? Anyway, I fixed it!

Anna, a small orphan boy flicks the butt of his last cigarette into nothing in particular. Perhaps a lava pit or a Moscow street. He looks longingly at an empty bottle of vodka standing next to him. I guess, if it is empty, it’s really just a bottle?

Anna is shivering, looking at his companion, Olaf. Olaf is a beaten robot tank left over from the Finno-Korean Hyperwar. “I am so hungry,” says Anna, beaten like the red-head orphan he is, “I haven’t eaten since the blast. So, so hungry. Also cold.”

“I know,” mutters Olaf under his breath. “I know…,” the camera zooms in on Olaf’s face, all dramatic-like, “I am Frozen, too.”

All the songs will be performed by Elsa, who is played by Putin from the Funk Overload version of Rasputin.

Kristoff is exactly the same as in the original, except his name is spelled Krystof. He even gets to play his one-man boyband song, and his entire character arc and the song will be just as meaningful and relevant as in the original.

The over-sized goat will just be a figment of Krystof’s imagination inspired by a tattoo he once saw on the butt-cheek of a fat man in a truck-stop bathroom.