I already have created a simple plug-in for my cosimulation plug-in for ProM.  See my video demo here for more information about the current status.

The current plug-in handles “most” plug-ins, but it has at least four short-comings that would be neat to expand on.

Second, it would be useful to provide a library of “standard conversions”.  For example, a java.io.File object is in many ways the same as a java.lang.String, as we can convert back and forth with no loss of information.  These could either be added explicitly or a generic conversion facility could be created (by inspection using reflection).

Third, it would be very useful to be able import and export values when a plug-in exists.  This could be done by allowing import/export plug-ins to be used as well.  Most likely, implementing the first two would make this near-trivial.  It would be useful also to be able to export the view of an object.

Fourth, it would be useful to have a bit more control over the mapping.  It could show a table like this: 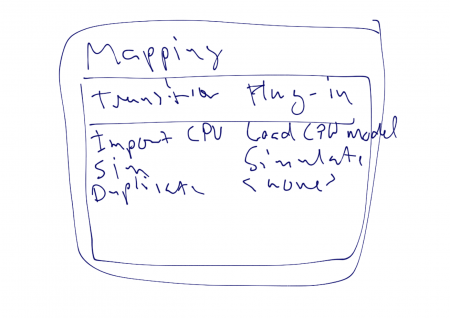 The first column is a list of all transitions of the model.  The second column lists all “matching” plug-ins.  It is possible to statically infer (some) type information for each transition about pre- and post-conditions and only show matching plug-ins for each transitions.  Adding conversion rules naturally complicates this, and choosing plug-ins defining post-coditions of some transitions would invalidate some plug-ins for other transitions.  Plug-ins could be shown using 3 categories: matching, matching pre-conditions, and matching post-conditions.  The “best” (based on names, e.g.) should be selected from the matching category.  When another (especially when selecting one not from the matching category), the appropriate plug-ins should be automatically updated to predecessor/successor plug-ins (unless they have been manually set by the user).  Most of the time, it should not be necessary to modify this mapping as reasonable and matching plug-ins can be selected automatically.