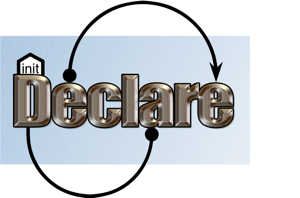 ProM has had support for Declare for quite some time.  Support has never been the best, because the Declare package just embedded all of the Declare tool inside ProM, which is of course not desirable.  The old data-structure had some problems, mostly that it was written for a different purpose, which made it have dependencies that a not really necessary for most uses. 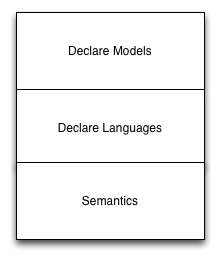 The new data structure works on 3 layers.  At the most concrete layer, we have Declare models.  They are simply a collection of tasks and constraints.

The new package is entirely interface based. This means that all concepts have an interface and (at least) one implementation. Here, I’ll talk mostly about the interfaces, as the implementations are less important for most.

The important part is that everything takes interfaces as inputs if at all possible, and classes return concrete classes if possible. This means that the assumptions are as weak as possible and guarantees as strong as possible. This philosophy should be adhered to, and no class should ever implicitly assume parameters can be cast to a concrete type.

Rather than making a model supporting anything, we make each component instead be arbitrarily extensible. Examples of extension are textual descriptions of constraints, graphical information, data annotations, etc.

We build on an abstract model which makes Declare infinitely extensible. At the bottom level, each element implements the Annotatable interface:
[java] public interface Annotatable {
<T> T get(Class<T> clazz);
boolean has(Class<?> clazz);
}
[/java] This interface exposes two methods. The get method returns an annotation of type T. If no such annotation exists, it is created. It is stored with the object, and two calls to the method will return the same object. The has function returns whether such an annotation exists.

Any node can have at most one annotation of each type, so one should not rely on generic classes for annotations, such as a generic String or a generic Collection, but rather on custom subclasses.

At the bottom level, we have the semantical domain. This will typically be some well-understood mathematical structure, like finite automata. A semantics can be translated to the semantical domain. Mostly, this is not necessary for anybody but those adding new semantics. The basical semantics is (simplified) like this:
[java] public interface Semantics<S extends Semantics<S, Domain>, Domain> {
Domain getDomain();
}
[/java] A Semantics is parametrized with S (just the class implementing Semantics which is needed for technical reasons) and Domain, the semantical domain. Most of the code in the new Declare package uses the implementation RegexpSemantics which uses regular expressions as intermediate representation and has finite automata as domain. The skeleton of the RegexpSemantics looks like this:
[java] public class RegexpSemantics implements Semantics<RegexpSemantics, Automaton> {
public RegexpSemantics(final RegExp<Task> semantics) { … }
}
[/java] The Automaton and RegExp classes come from the ltl2aut library from Declare.  The parameter is a regular expression over Tasks (which we get to later).

A parameter is just an encapsulated name (which can be annotated if needed).

The package provides a simple implementation of the standard Declare language with all constraints, and also support for deriving one language from another.

Declare models are fairly simple: collections of tasks and constraints.  Each are tied to their semantical domain and the language used.  No checks are performed to ensure this for performance.  For example, all constraints of a model should be from the same language, and all tasks used for actual parameters should live in the model.  A simplified version of the DeclareModel interface is:
[java] public interface DeclareModel<S extends Semantics<S, Domain>, Domain> extends Annotatable {
public DeclarativeLanguage<S, Domain> getLanguage();
String getName();
Collection<Task> tasks();
Collection<Constraint<S, Domain>> constraints();
Domain instantiate();
}
[/java] This should be fairly obvious by now. A model has a name and comes from a certain language. It has a collection of tasks and constraints. Each constraint is parametrized with a semantics and a semantical domain.

For convenience (and because it can be made in a generic way), it is possible to directly instantiate a model.

We notice that the interface does not allow modifying models. They should be constructed by either an importer, an editor or a miner and never directly modified (except annotated). Model constructors need access to concrete implementations anyway (or a factory, but we have decided not to make such as that would just clutter the design at the present).

We can get the semantics and domain (for convenience) for each constraint. We can also get the underlying instantiation and template.

A Task just has a name.

That concludes the data structure. We just have a model which has tasks and constraints. All are parametrized with a semantics. Constraints are instantiations of constraint templates, which are collected in languages. Semantics are abstract objects which can be turned into a semantical domain for further processing.

Recently, we released CPN Tools 4 with Declare support. This prompted a major cleanup of the code base. This also lead to a survey of available tools and implementations. This revealed that no semantics for Declare published hitherto is correct.

Declare has traditionally been founded on finite linear temporal logic (just LTL in the following). This seems like a nice idea, because there is a bunch of theory about LTL already and it should be possible to leverage this. Also, LTL is a nice and high-level language and several implementations exist. The only problem is, this is not really true.

LTL in general talks about the future of a single execution. It is possible to say that if A is executed, then B has to be executed later. LTL normally talks about infinite such executions, which means they never have to worry about what happens at the end of the execution. Declare instead concerns itself with finite executions, so we should look at a finite segment of LTL.

The Problem of Finite LTL

Finite LTL has two problems: the ending and the beginning. As executions are terminating, we need to be able to say what is acceptable at the end of executions. Also, as executions are ending, we need to talk about what happens for an empty execution. The first problem can be ignored using adequate amounts of hand-waving and ignoring the next operator. The second problem can be ignored by saying that we have no semantics for empty traces.

Neither of these work for Declare. Many constraints need the next operator for their semantics (if A happens, A cannot happen again until B has happened and things like that). We also need to talk about the empty trace when doing on-the-fly analysis.

The other problem is harder to deal with. It is actually not possible to give a semantics for finite LTL which talks about the empty trace. It is just not possible. What you have to do is to create a weak and a strong semantics and switch those around. This is solvable, but I did not feel like redoing the entire implementation. Also, it makes it doubtful that most theoretical work on runtime analysis is sound. It just generalized infinite LTL results to the finite case without justification, and these are substantially different.

The LTL semantics for Declare is incorrect when talking about the start and end of executions. It cannot be used for on-the-fly analysis, and the semantics is broken for several corner cases. No LTL semantics given so far is correct.

While it is possible to make an LTL semantics for Declare that is healthy, I decided to drop that and instead use regular expressions. They are well-understood and I could make a translator in less than a day. I could make the translator to the same semantical domain class as before, so I could reuse any of my tools building on that. Tools relying on alternative implementations are broken, however.