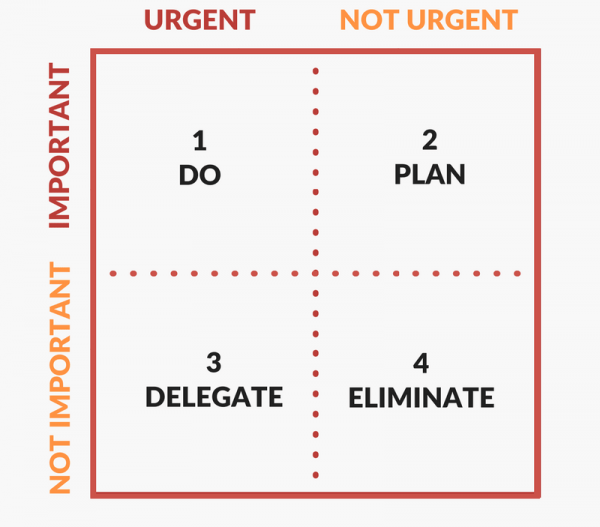 So, here’s a super pretentious post. I believe most people will be familiar with Eisenhower’s matrix for prioritization; it partitions tasks into the urgent/not urgent ones, and into the important/not important ones:

The idea is that tasks that are not important should be delegated or eliminated and the important tasks should be done immediately or planned for.

I recently read a book ((It’s called Procrastinate on Purpose: 5 Permissions to Multiply Your Time. It’s probably not worth the time reading as my summary gives you the entire thesis of the book.)) that made a very good point: if you always do the important and urgent tasks, you never have time for the important and non urgent tasks. The book was on management strategies and the main point was ((Really, the main point was selling books and consultancy/training, but let’s play along because there’s is also truth here.)) that, instead, time should be spent on the important and non-urgent tasks, because they are often much more important. Instead of constantly putting out fires, make a structural fix so you avoid fires in the future.

When I started bartending one of the first things I learned, and one of the imperative things I told bartenders when training new people was to always keep the bar clean. People can wait for another 20 seconds for a beer while you wipe away spilled beer or put back that bottle of Arn Bitter, because otherwise it accumulates and suddenly the entire bar is sailing and nobody can find the Arn to make a Long Island Arn. Don’t just deal with what is important and urgent, serving orders from customers, but also do what is important and not urgent yet, to avoid having to deal with much bigger fires in the future.

About a month ago, I got a subscription to Apple TV+. I get it for free with my Apple Music subscription because I’m a student (I also only pay half price for Apple Music). I’ve not had a streaming subscription for ages because I don’t really care much for TV, but since it was free, I’ve watched The Morning Show and The Space Show. They’re all right, I suppose. What really hit me is the lack of continuity. Every episode will deal with a sub-plot that seems incredibly important in the moment, but will be almost entirely forgotten once the next episode rolls around. I, of course, understand why it is like that from a commercial point of view: get the series going with “interesting” content every week and things happening, giving just enough overarching structure to keep viewers hooked, but not enough that there is a clear story that makes it hard to miss episodes or join later in a season, or progress the storyline fast enough you cannot keep churning out new episodes as long as the show is profitable. The characters all deal with what is urgent and important in their lives, and there is barely any time for dealing with what is important and non-urgent. However, all the urgent and important business is completely forgotten the when the next episode rolls around. So all of the stuff that was so important for 20 or 30 or 60 minutes turned out to not mean anything at all.

Which leads us to the pretentious part of the post: I posit that we are all unconsciously applying Eisenhower’s really rather bad advice to our daily lives. We are focusing on what is urgent and important to an extent where we barely have any time or energy for what is important and non-urgent. Like TV show characters we focus on what seems important and urgent now to a point, even though come next week it will not matter at all. Worst of all, we do so at the expense of what matters longer term. Heck, I know I do that; every weekend, I make a list of all the fun chores that just need to get done: cleaning, laundry, mow the lawn, and such. The list also includes less sisophysian tasks that “advance my character line” at a glacial pace, such as exercising and studying. I’ve even learned to interleave little tasks between the bigger ones, and more boring with less boring, to reduce procrastination and don’t get bogged down with boring tasks or have to skip all the small tasks because of the big tasks, or spend all the time overdoing small tasks to avoid getting started on a big task.

But while embarking on a 6 year study is probably a longer term “important and non-urgent” significant time commitment than most people with a full time job find time for, how much time do I spend on something that is important in 10 years? Or 20? Or even consider what that might be? I know I have hobby projects that are pretty much shelved during the semester because my head is completely burned out after 5 days of working and 1 day of studying. How much time do you spend on things that important and non-urgent? Or do you get bogged down by the important and urgent? A customer standing in line for 2 minutes can wait another 20 seconds for a beer; while it may seem urgent at the time, it is not really. And while last week’s entire episode of Space’R’Us was centered around finding ice on the Moon, this week it was forgotten and all that mattered is that gays are in cahoots with Russia somehow. What seems urgent may not really be, and what seems important might not be in the grander picture.