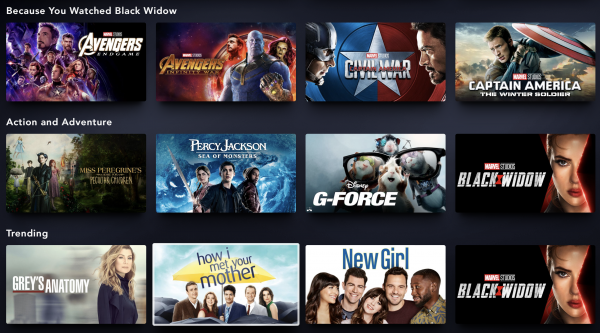 I don’t really watch TV, so while I’ve had Netflix and Amazon Prime subscriptions in the past, they provide too little value for me for the price. Disney+ is a pretty good compromise. The price is low and it has low-intelligence content I can watch while biking. I also have an AppleTV+ subscription (free with Apple Music for students), but LOL at watching that. Disney+ overall has acceptable content, but the user interface is literally Hitler.

The user interface has so many annoyances that have been there since before launch (the Netherlands was one of the countries that got a trial of D+ before official launch). Here’s a Top 10 (note to self, adjust number of items) of the most annoying bugs to me:

Not only that, those 4 Marvel movies it recommends I watch because I watched Black Widow? Watched them all, so the recommendation is useless.

Oh, and one of the recommendations, How I met your mother, I started watching on the platform but then stopped because it’s extremely cringe. A good recommendation algorithm would have realized that.

More bad recommendations. The Marvel movie and Hamilton I’ve both seen on the platform. Why are they recommended?

Mandalorian I watched, like, 10 minutes of the first episode before I got bored. Why is that on the special recommendation list for me?

I have no particular interest in Marvel movies. I watched the ones up to the big purple guy with bling died because everybody were raving about them and I had spinning to do. Didn’t hate them, didn’t love them. Watched the one with the Taylor Swift-looking woman in it because the weather was shit today, so I took a couple hours on the spinning bike instead of biking around the city. Sure, D+ cannot read minds, but a non-shitty recommendation algorithm would allow me to say “stop showing me cartoon movies for kids!” or at least black-list the big franchises a lot of people apparently get D+ for but that I have no interest in.

Disney+ has a list of things you have started watching but didn’t finish. Vaguely useful. Except everything on streaming platforms in Europe has long credits because it has to show who voiced everybody in 10-20 languages. NBD, you’d think, but if you don’t enjoy those 5-10 minutes of black screens with white letters on them to see who did voice Elsa in Russian, D+ will not detect you have watched it to the end, and it will just hang around forever.

And yes, I did watch Monsters at work, what of it? Fingers crossed you’ve already forgotten about the comment about cartoon movies for kids from the previous list item.

If by some miracle you manage to navigate the ghastly recommendations and find something to watch, you are greeted with this abomination of a movie information screen. The movie description is clipped in the middle of line five for … reasons? I guess it’s after a given number of words of characters, but it sure looks silly. Also, it’s the one thing I’m interested in when judging whether to watch a movie, so maybe don’t cut that off to make room for your irrelevant recommendations?

Which brings us to: why are the suggested tab selected below? I’m looking at whichever movie, so I’m interested in the details about that movie, not whatever suggestions your drunk squirrel of an algorithm thinks I want to (re-)watch. Oh, and if I click on the Details screen I get this junk:

The same description as before (and some actually useful information). The description is cut off by the end of by browser window, and I have a large screen, so I am pretty sure everybody has to scroll down to actually read the end of the description. How about showing me this information by default and if you must advertise your humanitarian crimes of suggestions, do it in the periphery, not front and center.

After watching something, if you sit thru the credits long enough, you get to this turd of a screen:

The credits continue in the small black window so you don’t miss out on knowing who voiced Olaf in Serbian, and you’re recommended another masterpiece by the recommendation algorithm for which they had to invent two placeholders just to put in the 12th circle of hell.

If, like me, you think the recommendation looks absolutely awful and want to get back to the main menu to get recommended more Marvel series and movies you’ve seen, take a guess at how you’d do that? You click on See Details for the audio-visual masterpiece you have already rejected (at which you are greeted with the above “not the details of the movie you selected” screen) and from there you can go to the main screen. How about just leaving the back button at the top like it is for virtually all other screens?

6: Memory of an elderly amnesiac with Alzheimer’s

Sometimes, Disney+ just forgets who I am. Please log in again. Also, we’ve forgotten your cookie preferences. I have tried “Reject all,” I’ve tried “Accept all,” and I think once I even tried the Manage preferences. None have lead D+ to not showing me reminders about cookies.

Also, we’re going to show the cookie screen even when you’re already logged in. That should not be necessary – I’m logged in, so you can store that information in my user profile, not in a cookie. There is no need to show me your dumb cookie screen anymore.

So, that’s my top 15. Feel free to add any annoyances you have encountered in the comments or on my OnlyFans page.

Disney+ has so many annoying little bugs that really should have been fixed by now. They annoy me almost every time I watch something. Just look at this post: they annoyed me sufficiently that I made an angry blog post about it on the internet, and that’s, like, one or two steps before a change.org petition or a GoFundMe!

The most annoying part is that most of these things are really simple fixes. Remember what I’ve watched. It remembers for a while, but seemingly forgets? Remember it and filter out those recommendations and duplicated. Allow me to tell the algorithm no thanks to content. Select the Details page for movies by default and either fix the “completed movie” detection to account for excessively long credits or allow me to manually mark something as viewed/completed.

Those things are in the interest of D+ because keeping pushing content I don’t want takes the place of content I might want to watch, giving the impression of having finished the service. Which does not look well when I have to decide whether to renew my subscription, especially combined with getting annoyed every time I use the service due to poor design.