I got a new laptop for my work. It’s an Aguilera-ugly HP something-or-other laptop. It’s built in a design that aspires to Russia in the seventies and is as heavy as a Lada, which is qwuite light for a car but quite heavy for a supposedly portable computer.  It runs Windows, which apparently is a version of Lunix that works but looks and handles like sex with a goat: not really meant for humans.

Here are a bunch of pictures showing off the monster (which I’ve named Jamie Lynn after B’s baby sister) along with Britney: 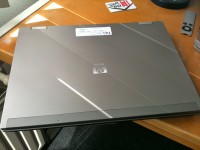 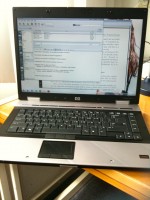 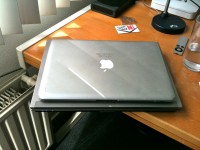 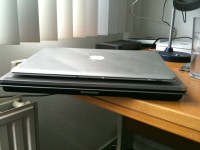 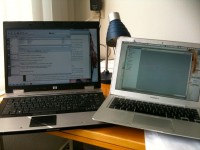 It’s not that I don’t like Jamie Lynn. She’s younger than Britney and most likely more energetic.  She’s just never captivated my heart with her beautiful music. That’s the reason I named the new computer Jamie Lynn. It’s younger than Britney (2 GiB RAM is just not enough anymore) and faster (the CPU has more megahitebix or somesuch). It’s just more clunky, has a bunch of important-looking LEDs that flash more than a hooker on a slow night, and I had to peel like a billion stickers of the machine just to not get blinded by aggressive colors.

When you get over the hardware, you get to the software. Jamie Lynn boots into Windows (I was also offered BrownOS, but declined as that is even worse than Windows) whereas Britney boots into OS X. I set out to make the experience sort of acceptable, so I started installing ZeusOSX for Windows 7 using this guide for doing it for Vista (part 2).  That was fun.  Also, the guide on overwriting system files almost but not entirely works (I needed to go to Safe Mode to make it work).  Naturally, you also need to install heaps and heaps of Windows updates.

After installing ZeusOSX as well as the included mouse cursors and such, I installed RK Launcher, which is quite crappy and not updated for ages.  I used the installation image from here – I can only strongly recommend download dubious files from the internet and running them – and copied files from the latest nightly build over the files installed.  That provides me with something that is a poor replacement for the Dock but still better than the abomination that comes with Windows.

Naturally, you’ll want to install Safari to get a real web-browser. 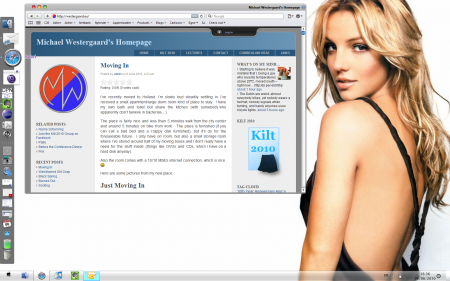 I’ve also installed a B wallpaper. It’s better than regular Windows, but only in the sense that sex with a goat is worse than sex with an attractive goat. I suppose – in fact I have no data to back that up. Join my Facebook group for people who have never had sex with a goat.

Anyway, after that I installed Switcher, which mostly emulates the Expose of the Mac: 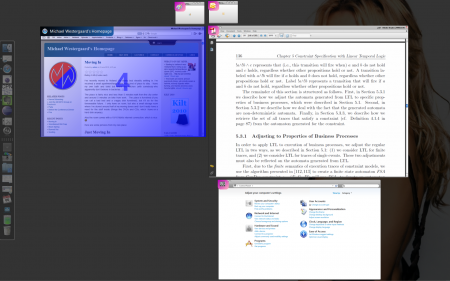 I also installed some icons and stuff, but I’ve forgot how I did that.  It’s explained in part 2 of the article linked above.  I could not get the login screens to work because the version of some program or other did not work.

Next up is to install a proper keyboard (how do Windows users tolerate crappy Dell keyboards?) and a decent pointing device.  Now my setup looks like this: 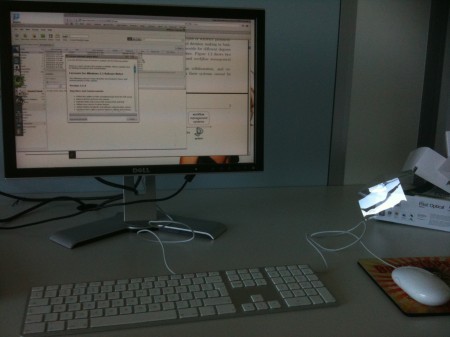 Ah, much better!  After this, you discover something weird.  Whenever you press Cmd-C to copy or Cmd-L to go to the location bar, Windows gets confused.  Apparently the designers of Windows got the Command key mixed up with the Ctrl key, so all key-combinations that righteously should be Cmd-something are instead Ctrl-something.  Weird.  Luckily, we can fix that.  Simply install KeyTweak (is that ever a beautiful web-page – very Windows!) and re-map the Command key to be Ctrl, and restart (it is Windows, after all), and your keyboard should behave in an almost sane way.