Looking at the CPN Tools download statistics, we see some interesting things.  Starting in February this year, we started tracking (again) which versions of CPN Tools were downloaded.  The results are quite interesting, but not too surprising: 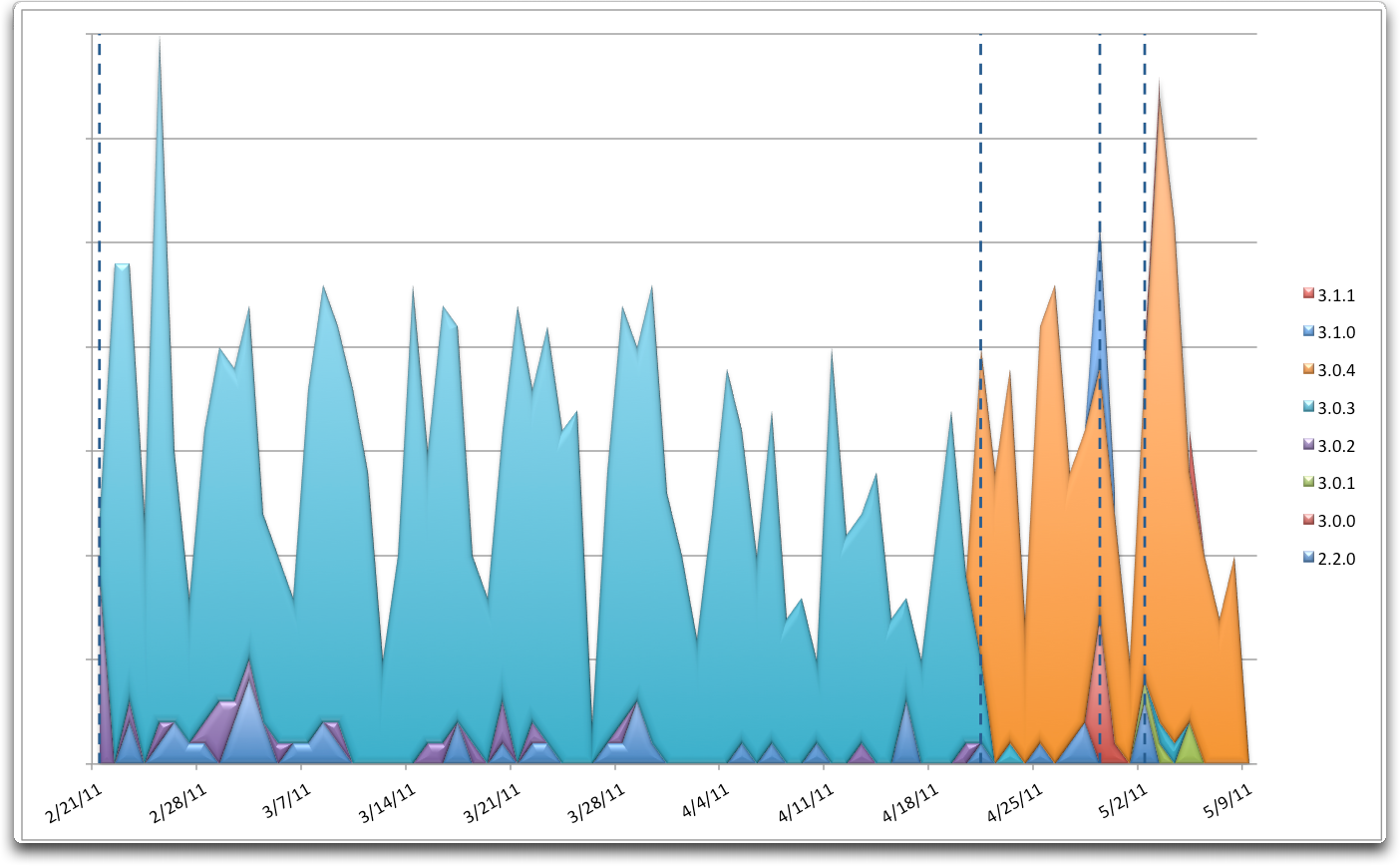 In this chart we see the total number of downloads as a function of the data. The downloads are split into versions.  The first thing we notice is that CPN Tools users clearly works Monday-Friday, as evidenced by the clear drops that happen every week.

We also see that the number of weekly downloads is almost constant and new releases only result in minor spikes.  None of the versions listed here has been announced widely, so that may be a reason.

We see that development releases (3.1.0 and 3.1.1) result in only minor interest at release and do not overtake the releases marked as stable.

We see that releases 2.2.0 and 3.0.2 have a special status.  They see a few downloads every week despite being outdated.  I know for a fact that two courses here at TU/e uses CPN Tools, and that one encourages users to use release 2.2.0, and the other started when 3.0.2 was the newest release, so that may be the reason.  It is also possible that people stick with 2.2.0 as it was the latest stable release for a long time (~4 years, IIRC) and 3.0.0 introduced some quite major changes.  The 3.0 series has proven stable in the last haft year, however, so people should really upgrade.

For me as a (the) developer of CPN Tools, this is quite interesting; it shows that I can make development releases as often as I want.  They are tested by a few of our users, but our general user-base does not switch to development releases.  Also, I do not have to support old minor releases at all, and only to a very minor extent for old major releases.  Typically, the level of support people receive on old versions is “upgrade to the latest version and see if the problem persists,” so it is not easy to see the cause and effect here. 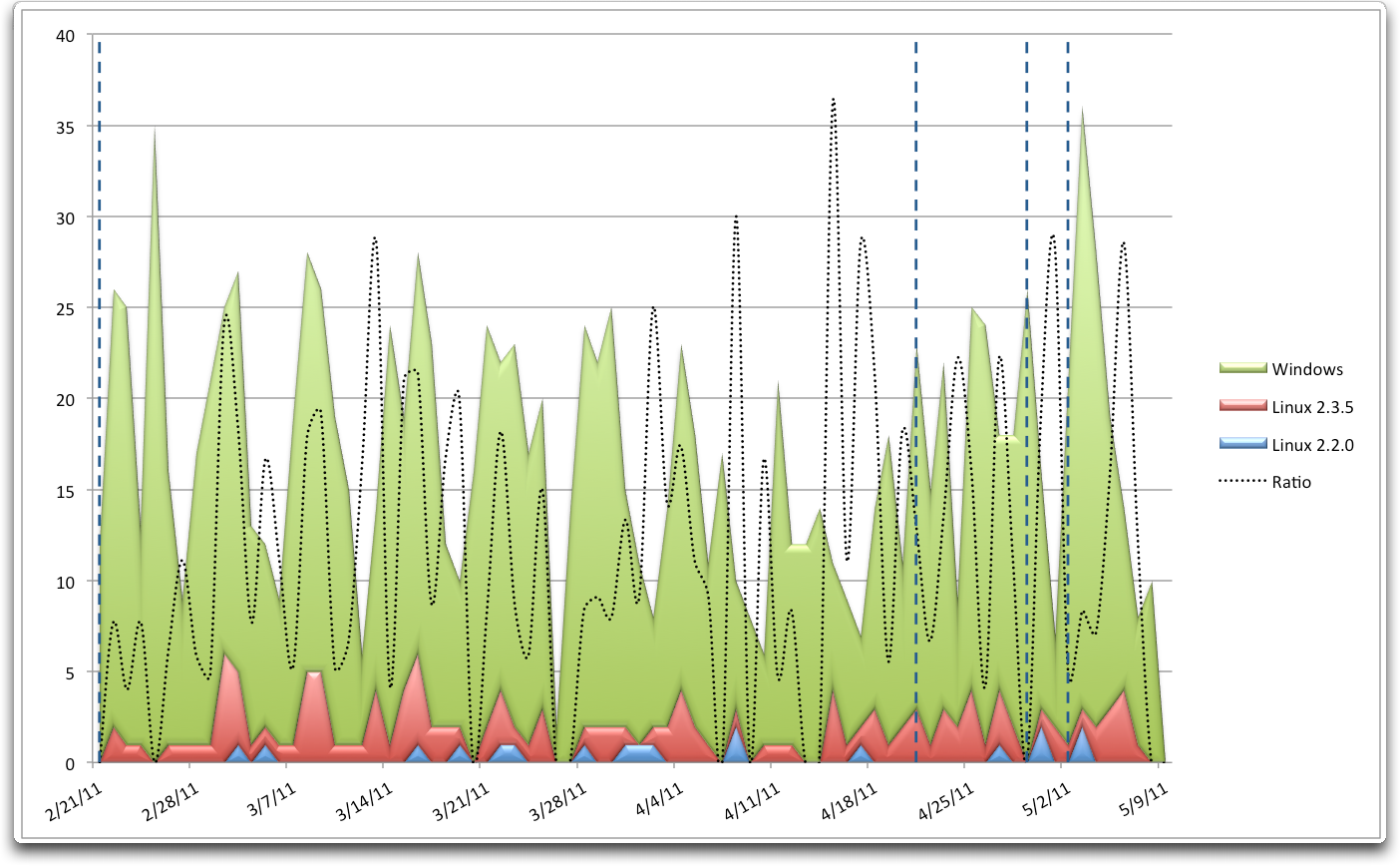 Finally, I have some statistics of accesses to the download page.  This does not equate downloads, but comprises the only data I have from the launch of the new CPN Tools web-site: 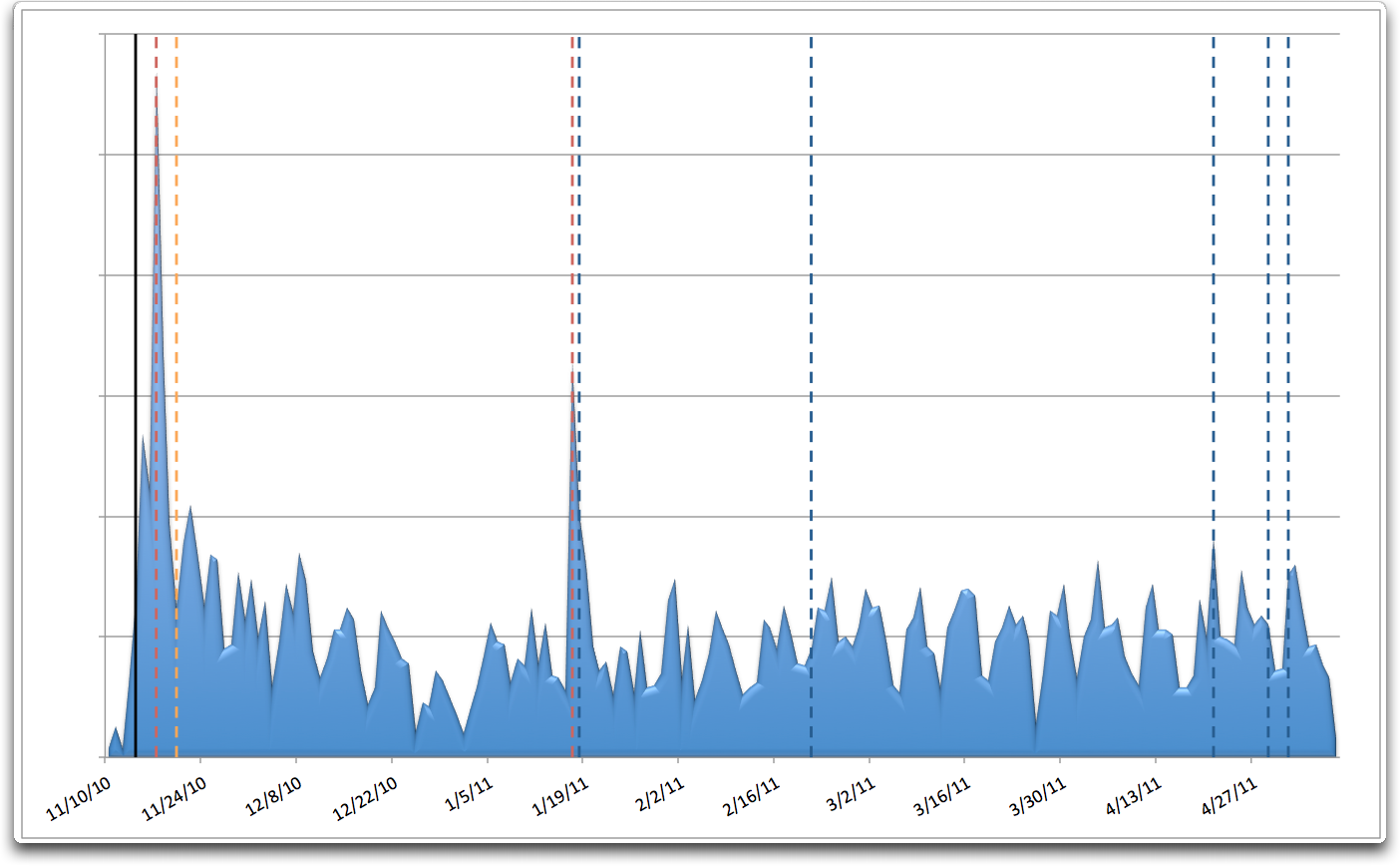 The solid vertical line in the beginning shows when the old CPN Tools homepage at Aarhus University started redirecting to the new page, and the red dashed lines indicate when versions 3.0.0 and 3.0.1 were announced at our own internal announcement mailing list.  The orange dashed line shows when 3.0.0 was announced on the Petri nets mailing list and the blue dashed lines when minor releases were announced on our support mailing list.  While accesses to the page does not equate downloads, they still give an indication of the interest in downloading CPN Tools.  There is a clear increase after the launch of the site (obviously), and clear spikes after announcements on our internal list.  The spike after announcing on the Petri nets mailing list is much smaller, I assume because most people interested in CPN Tools are already on our own list.  Minor releases does not result in noticeable spikes.

We see the same structure, indicating downloads mainly take place during business days, and we see a general decreasing tendency from the initial announcement until January.  This may be because most people have downloaded CPN Tools and interest decreases or it may be because of Christmas.  After the announcement of 3.0.1 (the second red line), it seems interest stays more or less constant.  This may just be because a course here at TU/e started using the new version and site, or it may be because new release have become much more common, reviving interest in the tool.

I’ll see if I can extract the old download data and generate a chart going back the last 10 years (if the old data contains date and version information for downloads).