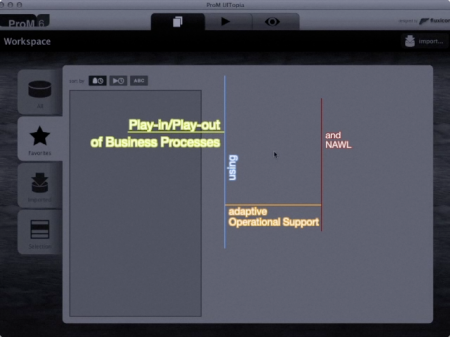 Behind the abstract-like header is something really cool: Using NAWL and a revised version of the standard operational support in ProM, it is possible to build a process-aware system without ever talking about models.  You just load a historical execution or even just start using the tool without any seeding.  You will get a list of all actions, a prioritized list of recommended actions, and you can even add new actions yourself.

NAWL is a renaming of the "I'd Rather Read Facebook" workflow system  to "Not Another Workflow Language" and realizes that while there are many workflow languages, the solution is not to add another workflow language, but rather to completely avoid using any (user-facing) language.  NAWL looks and works like a simplistic workflow system, but knows (almost) nothing about the underlying process.  Instead it uses operational support to provide suggested actions.

As operational support is now adaptive, i.e., can learn from what it sees, the system becomes wiser and provides updated and hopefully better suggestions as it witnesses more executions.

This video gives a quick demonstration and how it can be used together with adaptive operational support to provide play-in (automatic learning of a model from observing the executed tasks) and play-out (aid users and suggest actions to take from the learned model) of business processes.  Also, this is the first video, I've edited in Final Cut Pro, so blame any mitsakes on the terrorists and hackers – I'm certain they are responsible.