I want to replace Apache by nginx, but I don’t want to do a big conversion in one step. Hence, this is what my webserver looks like now.

Previously Apache was the frontend but now nginx is taking over the role with Apache being phased slowly out whenever-the-fuck-I-feel-like-it.

After I switched to php-fpm and FastCGI, I don’t really need the functionality of Apache anymore, so the less resource intensive nginx should be a suitable replacement. Also, I needed WebSocket forwarding to play, which is another layer of complexity with Apache but directly supported by nginx.

My only doubts are whether nginx can do WebDAV and Subversion. Well, WebDAV can go fuck it self, stupid outdated technology, and Subversion has mostly been replaced by Dropbox for me anyway. Otherwise, I guess that’s a reason to pick up git or something.

Bye bye Apache, it’s been more than 15 years, but now you have to leave for a younger model. 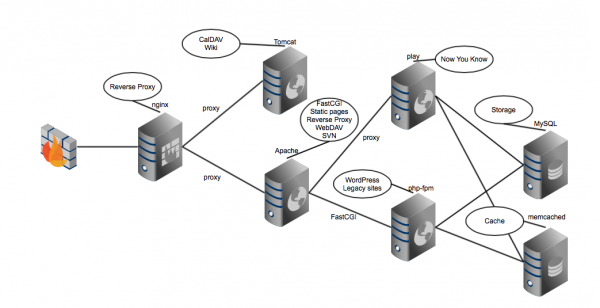