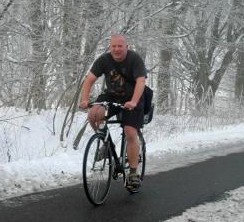 So, here’s an interesting experiment.  As I start writing this post, I have no idea what the conclusion is going to be.  See, the thing is, I recently started a new job, and like any citizen of the Netherlands I bike there.  The difference is it is roughly 40 km from my home, so on the way I have plenty of time to think.

A lot of people are very surprised I bike every day, even when I tell them that the second the weather gets annoying I’m on the train or something equally uncomfortable.  Normally, I rationally explain that going by train and bus will take approximately 75 minutes when I include having to wait and get from one means of transportation to the next.  Biking takes currently around 100-120 minutes, which means that for a 2 * (110 – 75) = 70 minutes investment get 220 minutes of biking, which is good exercise and nice in the sun.

Instead of trying to reason with people, I instead considered just giving some retard-explanation to satisfy the most feeble-minded socialists: it’s good for the environment.  Never mind that the train and bus ride every day regardless of whether I spend just under 4 hours commuting and getting a sore butt in the process, but a bike of course has no CO2 emissions, right?

That got the scientist in me thinking…  Of course that is not right.  My Sports Tracker fairly consistently lets me know that a ride in either direction burns roughly 1400-1500 kcal.  That has to come from somewhere, and that somewhere probably leads to CO2 emissions.  So, the question is: how much CO2 does biking one kilometer let out, and how does that compare to common means of transport: train, bus, car, plane, tank, helicopter, walking, …  I know it’s weird to talk about the environment without having a predefined conclusion tailored to fit with your political agenda, but let’s try this the scientific way instead.

I frankly have no idea what the answer will be, but let us take a look at the computations…  When I bike, I spend extra energy.  I know that in order to bike 2 * 40 km a day, I end up burning approximately 2900 kcal extra, just for the exercise.  For 3.5 hours, I also breathe heavier.  To stay on the good side of my new colleagues, I take a shower when I get to work, and I also need a shower when I get back home, which means at least one extra shower a day.  I also need to do more laundry, as I am not a damn dirty hippie and sit around in my bike-clothes at work.  We also need to factor in the production of the bike.  All in all, we are going to consider 5 contributions to extra CO2 emission: extra calories burned, extra breathing, extra showers, extra laundry, and bike production.  I’m sure there’s other contributions (I use extra deodorant, wear and tear of clothes, extra sewage from extra eating, …), but let’s keep things simple.

I need an extra 2900 kcal to bike every day.  I’m not a car, so I can’t just consume gas which would probably be much more efficient, but instead need food.  Food is not just food when it comes to CO2 emissions; according to some hippie web-site, the more hippie your diet, the less CO2 do you emit. Fuck that jazz. Hippies do not have jobs and hence do not bike to them, so let’s go with an average diet. With beef. Because yum. 2900 kcal/day is roughly doubling the daily energy consumption, so let’s just assume that the hippie-site-numbers for one day is the amount of CO2 we emit for biking 2 * 40 km. The hippies say we need roughly 2.5 ton CO2 ((Really CO2 equivalent, because a lot of it not actually CO2 but other gasses which may have more or less impact on the environment. To appease dumb idiots it is all condensed into a single number.)) for one person a year. This means biking 2 * 40 km leads out 2500 / 365 = 6.85 kg CO2 for production of food. We could add extra CO2 to that for transporting and cooking my food, but I like my steaks rare, so fuck that jazz. That’s approximately 6850 / 80 = 85.6 g CO2/km.

If I skip my morning shower, I can cut down the excess showering to 1 a day (one after I get to work, one when I get home). I can reasonably cut down on at least one of them to just cool me down and wash off the sweat. According to this miserable piece of propaganda, showering uses approximately 700-1700 kg of CO2 a year. No, they don’t have units or anything else to back that up, but they have Massachusetts in the name, just like MIT, and I also checked other sources that actually have information but are harder to read, and they seem to largely agree. It’s the Netherlands, so the showers probably use gas, and it’s corporate so there’s no chance in hell it’s the low-energy alternative. Let’s say 800 kg CO2/year for a 10 minutes shower. If we assume I can clean my delicate body in 5 minutes, that’s a total of 800 / 365 / (10 / 5) = 1.1 kg of CO2 for 2 * 40 km or 1100 / 80 = 13.8 g/km.

How does this compare to other means of transportation…? The Guardian put up a shitload of numbers, but ignored the effects we have computed above for biking (though the article mentions some of them). Some highlights are: a small motor cycle (40-160 g/km)! Using a bus uses 20-80 g/km and a train 20-100 g/km (we’re avoiding electric vehicles as they ignore that the electricity has to come from somewhere – typically coal). Short-haul flying is just 230 g/km, and driving in a real car is around 150 g/km (less if car-pooling).

All in all, biking doesn’t really look that good. It emits significantly more CO2 than public transport, and even the worst cars come out better as long as you stick two persons in them. Given the quality of the numbers from the Guardian, they probably don’t add in production of vehicles, and definitely not all factors (production of electricity), so the numbers are likely too low. Yet, I think it is interesting that biking is almost uniformly worse for the environment than other means of transportation. Heck, I even emit 27.5 g/km of the CO2 in the traffic, which is approximately the same as a small scooter. The rest is emitted on the wrong side of the rivers or in Africa or some other place nobody cares about, but I pollute as much as a scooter when biking. And then some.

This result is genuinely surprising to me. I was expecting biking to come out on top, but still yield a fraction of the CO2-emissions of other means of transport. I expected the shower and laundry to have a huge impact and the impact of the food to be smaller (but still significant). Of course, biking doesn’t yield (as much) particle pollution, and none in the local environment, but that’s not what we were testing here.

So, henceforth, when people ask why I bike to work, I’ll tell them it is because the beach is too far away from home, so I support global warming to get it closer – nobody is going to miss Zeeland anyway.

25 thoughts on “Carbon Footprint of Biking”