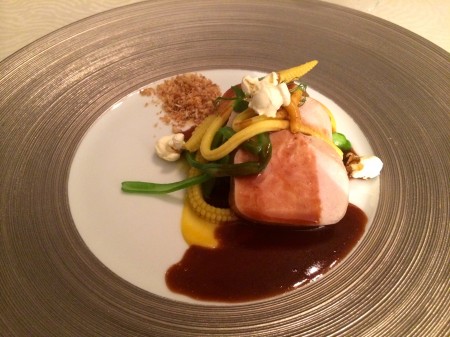 Second attempt at Restaurant Week, both the second Michelin star restaurant this week and the second time at Avant-Garde van Groeninge.  I went with the lovely Julinka, Manon and Aditi, and Twan.  Last time the food was mostly ok, but the service was a delightful mixture of rude and condescending, with a perfect ending of an attempt of cheating us on the bill, so expectations were naturally high.

We got apéritifs on the terrace with a view of the (luckily) empty PSV station: 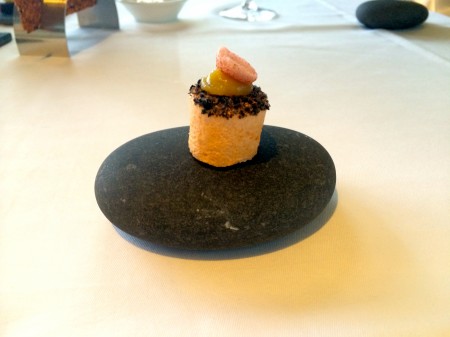 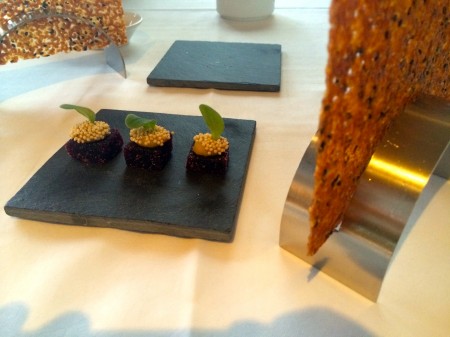 All quite decent and especially the cracker-cookie thingy quite funny.

Amuse at the table: 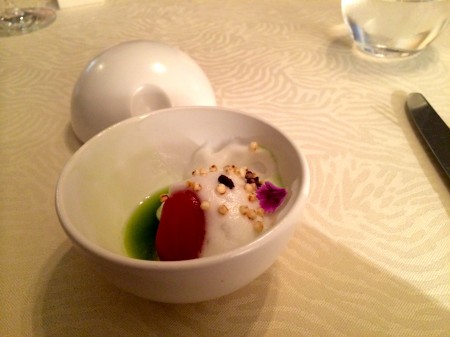 Very tasteful tomato and I’m a sucker for the very light foam.

The starter was langoustine with a bunch of colorful flowers and some green tea stuff: 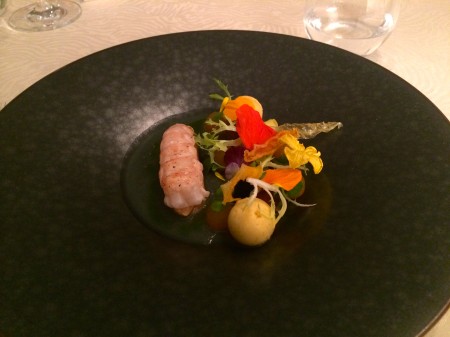 It was pretty and ok, but fairly bland.  The yellow curry balls were both described as the best and worst parts of the dish, but there’s no doubt that they were the part with the by far most taste in a course without much of any other taste.

Main was some sort of chicken, though it had a fancy name:

It was well-cooked, but it was just chicken with a bunch of vegetables and like the starter disappointingly bland. 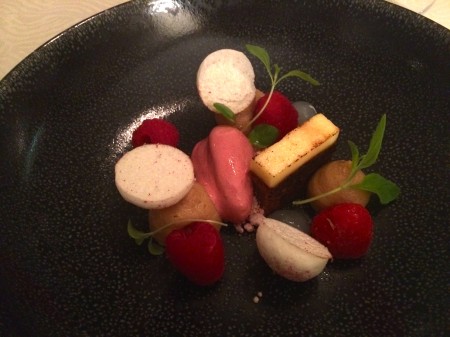 Sadly, this was the best part, and not really because it was exceptional (and I’m no dessert fan).  The almond stuff was nice with e fresh cranberries and ice cream.

Some candies went with the coffee, but nobody bothered explaining what it was: 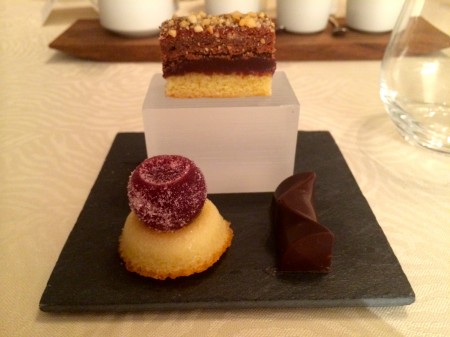 It was candy and as such ok.

The service was much nicer than last time, though the sommelier was way too quick in his presentations (especially with a couple girls who are very much into wine…).  There were the serving errors that apparently have become the norm now even on Michelin restaurants (serving/clearing from the wrong side and even a few cases of not serving the ladies first, a few cases of empty glasses – though after the first two times or so that didn’t happen again).  It’s nice they bring little tables for the bags, and nice that we are given the choice of where to have the apéritifs (couch, bar, or outside).

We ended up paying €70/person including tip for 3 courses, drink with the apéritifs, adjoining wine arrangement (3 teeny-tiny glasses of good but not exceptional wine for €24) for 3 out of 5, and coffee afterwards.

All in all, the service was good this time, the ambience is very much a matter of taste (with Avant-Garde being the fancier-looking more snobbish place and Karpendonkse the more gezelling place with a very homely atmosphere).  The food was a disappointment after Karpendonkse, even though I found the starter at Karpendonkse a bit bland, but definitely good.  All in all, I’m not in a hurry to get back.  For the price, there’s plenty other nice places in town, and a sommelier that doesn’t want to present the wines just doesn’t cut it.