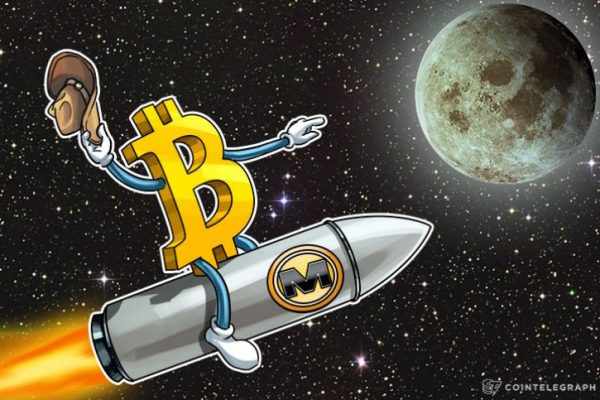 A couple weeks ago I was discussing a technical architecture with a consultant working for a client of mine.  After this, we ended just small-talking about this and that in tech, and ended up discussing “the blockchain” and “cryptocurrency.”  Much to the surprise of the other consultant, my judgement of the blockchain is that it is hype with little substance and mainly used as a tool by unscrupulous consultants trying to milk money out of customers by selling a solution whose only merit is buzzword compliance.  Here’s why.

The blockchain is to bitcoin as intelligent design is to christianity.  Yeah, in principle and technically the blockchain is a generic term which is not necessarily bitcoin, but when anybody says blockchain they mean bitcoin.

Bitcoin sucks as a currency: it is slower, more expensive, insanely insecure, and barely accepted anywhere.  Also, it consumes a metric fucton of electricity.  It’s everything the East German Mark was in Hamburg.  The main two reasons people are interested in Bitcoin today are: 1) as an investment instrument, and 2) as a generic technology.  I disagree with both uses, and as you can probably divine from the post title, in this post I’ll go into why the first argument for the blockchain sucks.  Sometime Real Soon Now™ I’ll write another post where I go into why the technology behind the blockchain is dumb for almost all practical cases.  Who knows?  Perhaps I’ll go back and make a little link to it here when I get to it… 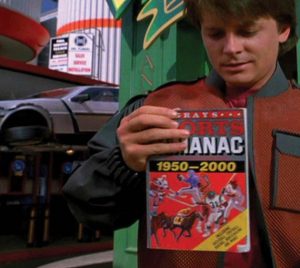 The biggest problem with investing in bitcoin is that all ways to make money with it requires you have either a time machine ((And not the Apple kind.)) or a reliable way to predict the future.  If you have a time machine, there’s far more productive things you could use it for, like convincing a young Klara Pölzl or Shelly Loraine of the virtues of eternal abstinence or, I don’t know, play the lottery, because it has a very good ROI if you know the winning numbers.  If you have a reliable way of telling the future, why not tell James Randi for a free one mill payout. Proponents of investing in Bitcoin will tell you that it has increased 60,000% in the past 5 years or 600% just in 2017.  That is technically correct ((The best kind of correct.)) but neglects the very important facts that 1) you did not buy a lot of bitcoins in 2013 and 2) you did not buy a lot of bitcoins in mid-January 2017.  That means that these increases are wildly irrelevant to you, as those rates will not continue.  If they did, one bitcoin would be $3.6M in 2022, $2.2B in 2027, and $1.3T in 2032.  That’s 1/60 the GDP of the entire world and there’s millions of buitcoins on the market.  Guess what would be 10 times the world GDP in 2047?

The fact that bitcoin has increased 60,000% over the past 5 years does not mean that it was a good investment in 2013.  A good investment is one where you compare the potential gain with the potential loss.  A bank account with a 2% pa interest has 99.9% chance of yielding 2% return in a year and 0.1% chance of yielding a -100% return (total loss) ((Assuming that there are no protection in place to guarantee consumers assets – which there is – and that the bank has a 0.1% chance of going bankrupt without you being able to get your money out)).  That’s pretty damn close to 2% return.  A lottery ticket has 0.000,000,000,23% chance of a 200,000,000% return, a bunch of higher probabilities of lower returns, and 98% of -100% return for a total of roughly -50% return for most state lotteries.  So the lottery has a ridiculously small chance of a very large ROI while a bank account has very good probability of a modest ROI (though these days 2% pa is very, very good).  Common investments should yield 5-10% pa over time – if it’s less, you take too little risk (the bank account is not a good investment), if it’s more, you take on too much.  60,000% (not to mention 200,000,000%) is clearly way too much.  But just how small is the chance of bitcoin succeeding? 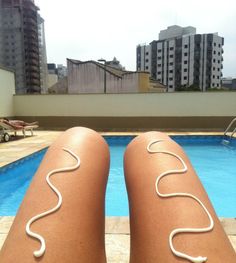 Well, 5 years ago, bitcoin was mostly just a toy.  A meme.  A few people mined them and there was no predicting they would take off.  If you predicted it, why didn’t you put your money where your certainty was and “invest” back then?  It was pretty much like investing in doge, twerking, harlem shake, grumpy cat or hotdog legs.  It was a fucking meme.  A meme which saw a value spike 2 years prior in 2011 and slowly was regaining value – by early 2013 it had regained half.  The chance you invested somehow in a meme instead of investing in stocks or lottery tickets is ridiculous.  The chance of picking the exact right meme is also miniscule.

But let’s say you did.  Now, what is the chance you didn’t lost all your bitcoins due to a virus, a harddisk crash, selling or discarding your computer and forgetting about your bitcoins?  Maybe you didn’t store them yourself, maybe you stored them on one of the big popular bitcoin exchanges that got “hacked” (ran away with all the customer’s bitcoins).  In 2013 Mt Gox handled 70% of all bitcoin transactions.  Still, it could happen you avoided all of them even if some of them were almost synonymous with bitcoin in their times. 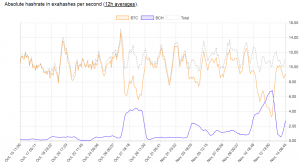 Now, suppose you invested at the right time just before bitcoin taking off in 2013, you somehow didn’t lose everything in a mysterious “hack,” then what is the chance you would have made sure to “hodl” after making back 100% of you money?  1,000%? 10,000?  If you’d “invested” $10 in January of 2013 and had the chance to take out $100 in March would you take it?  How about $1,000 in late 2013?  Good for you, it just dropped to half the value.  Sell in early 2017 when it’s back at the top?  Too late, now you lost 20%.  Sell in September when it’s just under $5,000?  Well, now it’s closer to $3000.  Also there’s two bitcoins somehow.  Oops, back up and over $6,000.  How about the instability that just went over during the past week where a plannet split didn’t go thru, sending bitcoin tumbling down from over $7,000 to below $6,000 followed by most mining capacity leaving the regular bitcoin to go mining the split-off bitcoin cash over the weekend causing transactions to build up and the price tumbling down?  Can you guarantee you would have held for the entire period?  Should you have sold when it was above $7,000?  Should you hodl now expecting it to go back up?  And if so, would you have invested an investment-grade amount?  Would you sleep well if you had $100,000 invested and suddenly lose 80% of your savings?  Because most private investors sell near the bottom and buy near the top even though all know you should do the opposite to make money.  It’s the bottom because a lot of people are selling and the top because a lot are buying. 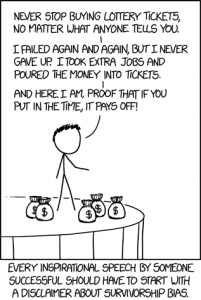 When people tell that bitcoin is a good investment because it has increased 60,000% in 5 years, they suffer from survivorship bias.  They only look at the one insane bet that panned out.  I mistakenly invested in the mother company of my employer (before we were sold off).  The stock is now a penny stock (not even – it’s a fraction of a penny) in an empty shell finishing off the bankruptcy.  Sucks; I lost my money there.  But on the bright side, I get to read auto-generated articles like this one:

If the quote doesn’t make you want to read the article and jump on the wagon consider that the “activity” the “article” compares trades worth $1,300.  It compares trades of an entirely illiquid asset, where any fluctuation is due to dumb luck.  There is pretty much no internal value (the market cap is perhaps $500,000).  Perhaps it will increase 25% tomorrow?  Perhaps some other dump penny stock worth nothing will?  Which one do you gamble on?

And this is if you had a time machine or were able to look into the future in 2013. 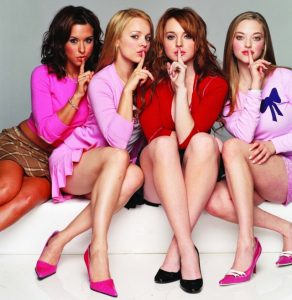 If you instead are living in 2017 and cannot look into the future, is bitcoin then a wise investment?  No!  While it is not true that “past performance may not be indicative of future results,” ((An instrument that has recently increased is more likely to continue to do so in the near future than one that has recently dropped.)) there is also an opposite effect called regression to the mean, which says that if something (like the ROI on bitcoin) has recently been above average (like the average return of the market; by proxy the return of the NYSE since 2013 was 51%), it is more likely to be closer to the average by next measurement.  This indicates that the gain for bitcoin is very likely to be smaller than what it is now.

Sure, you can still earn on fluctuations.  This will work as long as the market is rising.  Illiteral monkeys can earn money this way.  But it is not going to continue to the moon.  Will you get out in time?  Will you have the guts to stomach a $50,000 loss?  or do you wait until you have lost the entirely of your invested $100,000?  Bitcoin proponents believe that the deflationary nature of bitcoin ((There can only ever be a finite number of bitcoins; since it is not possible to create more, there can never be inflation, and assuming the value is fixed or even growing – the economy is always growing and if we all use bitcoin so will the value of all bitcoins – the value of individual bitcoins can never decrease and perhaps even increase.)) means that they will always be worth more.  Except if nobody is willing to part with their bitcoins because they only gain in value do they really have value?  Will we all use them?  Will the total value really increase? 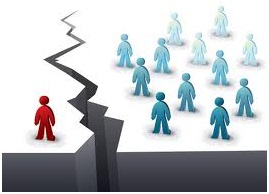 Why would we ever end up using bitcoin for everything?  Sure, they were here first, but it is trivial for anybody to set up a new cryptocurrency.  What is the chance that you bet on the winner?  The early in the market very rarely wins.  The IBM PC was not the first microcomputer.  The Altair was.  Windows was not the first graphical shell on DOS.  GEM was.  Geocities was the first place to offer free web-pages.  Napster was the first P2P piracy program.  MPMan was the first MP3 player, not the iPod.  Motorola invented the cell-phone, Nokia the smartphone.  Friendster and MySpace were social networks before Zuckerberg started creeping on girls at Harvard.  The early bird get eaten and somebody better comes and makes lasagna instead of eating a yucky worm.  Why would bitcoin be different?  Why would you bet on the first mover when historically, this is a terrible idea?  If not the first mover, which of the 1,234 coins (at the time of writing) would you bet on?  Perhaps it’s one that hasn’t been invented yet?  Or perhaps cryptocurrencies will be forgotten like mobile gaming in a few years? 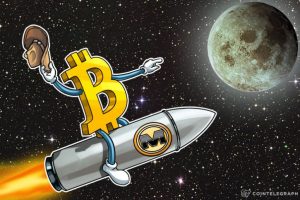 2 thoughts on “Why I am not Enthusiastic about the Blockchain or Bitcoin – Part 1: A Terrible Investment”