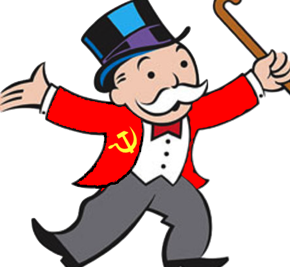 In order to make the area between the left (socialism) and right (capitalism) more nuanced, we’ll allow taxes, which provides redistribution: you pay a certain amount of your salary to a common kitty and the money is then redistributed according to some formula. Communism dictates that the state (or people) own everything and all are paid the same amount or the amount they need.  Capitalism dictates that we pay nothing to the common kitty, and hence there is nothing to distribute; you basically want to get as much of the money you earn as you can.  Most countries are somewhere in between nowadays: we pay part of our sallary, which is then used for healthcare, infrastructure, unemployment benefits and pensions.

Let’s assume that the more money, the more to the left you vote.  This leads to a contradiction, however.  The people earning nothing or next to nothing would never vote far to the right, as this would mean they earned almost nothing and got almost nothing from the state.  These people would either perish or start making more money, moving them further to the left.  But there are still people in this category, at least the ill and the people truly too handicapped to work, and the life expectancy is rising, so this group is, if nothing else growing.

If we assume no correspondence between salary and political persuasion, we can use the same argument: people with low salaries voting to the right would perish, which would tilt the balance towards a correspondence saying that the more you earn, the more to the right you vote.

Finally, what if the relationship between how much money you earn and how far to the left or right you vote?  This would not make the left-voting people very solidary, now would it?  It would mean that the people earning the more money would vote for keeping it, whereas the people earning little money would be for sharing all money.  At some point, the amount of money you pay to the common kitty will be outweighed by the amount you receive.  People more to the left would pay less and thus get more than they pay whereas people to the right would pay more than they get.  This would mean that the more you are for “solidarity” the less you pay and the less “solidary” the more you pay.  This would mean that the more (of mind) “solidary” are in reality less solidary and vice versa.  Either this makes no sense at all or the “solidarity” has to be enforced with power.  Not really that solidary either, if you ask me.

According to Information, a leftist danish paper, the relationship is that the more you make, the more to the right you vote.  As such, this is sort of fine.  Just don’t call it solidarity.  Free us for that hypocrisy as you forcibly relieve people who don’t share your opinions of their money!  Accept that people voting to the left are not the solidary ones, the solidary ones are the ones paying for the unemployed and public healthcare, not the ones insisting we must have those things!  This is also evidenced by this study, showing that republicans donate a larger share of their incomes to charity.