We have already covered the basics of extensions for CPN Tools 4 in Part 1.  I strongly suggest reading that before this part, as I’ll refer to concepts of that part (especially the communication patterns and the Extension interface).

In this part we’ll go thru setting up for development.  I’ll keep the description neutral of a particular tool, but I use Eclipse for development, and it’s probably easier for you if you do too.  We’ll also cover some of the basic abstractions we didn’t cover last time, including depending on other extensions (and a particular useful extension), and adding options and instruments to the CPN Tools GUI.

To get started, you only really need the SimulatorExtensions.jar shipped with CPN Tools 4.  It might, however, be simpler to use or at least refer to the source code for the extension server.  Like the rest of CPN Tools, the simulator extension server is open source, and you can get everything right here (link is for the 4.0.0 released version, if you want the bleeding edge head version, go here instead).  That link points to out Subversion repository and you can check out the source from there.  Before you do that, I urge you to read on, however.

The source is split up into separate Eclipse projects.  It should be possible to use another tool with the correct setup, so good luck with that if you don’t use Eclipse.  Here I’ll just list the projects necessary to get started.  The SimulatorExtension.jar also includes other projects, and I’ll list those as well as Eclipse will complain otherwise.

org.cpntools.accesscpn.engine.protocol
As the name suggests, this code comes from Access/CPN. It has some basic data-structures for communication. It is in the Access/CPN repository here.
org.cpntools.simulator.extensions
The core extension package. It includes the central interfaces and the server handling all communication. It also includes the ModelScraper extension we’ll look at later.
org.cpntools.simulator.extensions.launcher
The actual launcher for extensions. It uses introspection and automatically finds all extensions on the CLASSPATH.

To test your own extensions, you need the first three packages on your build path, you should probably have the four other listed ones, and you should have your own code. The project is set up so the launcher package imports all the others.

To make a new extension, simply implement the Extension interface from part 1, make sure you have your implementation (and any required libraries) on your CLASSPATH, along with the above packages, and launch the class org.cpntools.simulator.extensions.launcher.Launcher from the launcher package. This automatically finds all non-abstract implementations of the Extension interface and sets up a server with those.

The Extension interface has a lot of methods, most of which are not necessary for normal operation.  For this reason, the AbstractExtension takes care of all of the boiler-plate and provides a number of convenient functions.  In fact, you only have to implement getIdentifier and getName of the Extension interface to make a working extension.  As custom prescribed, have HelloWorld for CPN Tools extensions:

Compiling and running, we get the extension server window with out new extension listed: 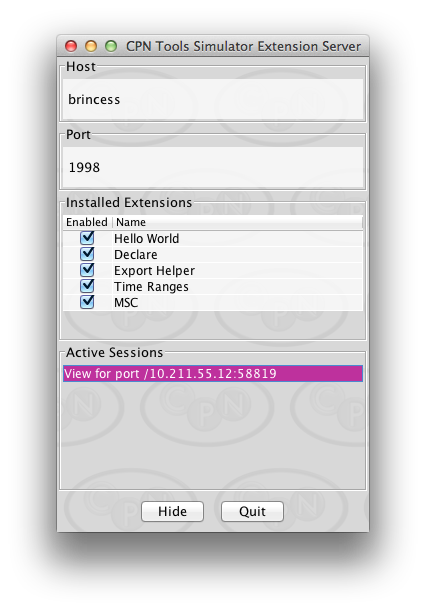 Our extension also shows up in CPN Tools under Options -> Extensions: 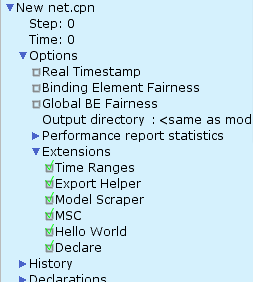 In the example, we use Extension.TESTING (l. 7) for the extension identifier. This is ok for testing (hence the name), but should not be used for real deployment. You should also not just make up a number. The server checks and does yield an error if there is a conflict. To avoid conflicts, use the procedure here to get a unique identifier (or a range of identifiers) for your extension. You may only distribute extensions with an identifier obtained like this.

The AbstractExtension takes care of providing reasonable defaults for all methods of the Extension interface. This also means that it manages the responses for getSubscriptions (and getOptions and getInstruments). It contains methods for adding any subscription (or option or instrument) to the response, so, for example, the constructor of the ModelScraper we discuss later just add a subscription to a particular command:

For the remainder of this series, we assume that all extensions are made by extending the AbstractExtension.

Extensions can expose commands to the CPN Tools GUI. These options are automatically kept update by the framework. If you use the Extension interface directly, you get a call to setOption whenever an option belonging to the extension has changed, but the AbstractExtension has a much nicer way to handle that.

To add an option, we just use the addOption method of the AbstractExtension. An option takes three parameters, a name (shown in the GUI), a key (it just needs to be unique), and a type. Options can have type String, Integer, or Bool. The addOption method takes an optional default value for options. We can augment our Hello World extension to handle options by adding a constructor:

These show up under Options in CPN Tools:

When an option is changed, this is directly reported back to the extension. The AbstractExtension extends Observable and turns the call into a notification. The notification contains the option instance changed, which can be used to get the value. A simple that just prints the value if if is a boolean would change the constructor to:

The ModelScraper is a standard extension. It receives and maintains information about a model from the GUI. The information is then translated into to high-level messages, so developers do not have to bother with that.

To get such notifications, we just need to piggyback onto the ModelScraper extension. This is done using the getExtension call of the Channel.  This must not be done in the constructor, but should be done in the setChannel method (or in an event handler triggered after this call).  The PP-CPN extension (not yet official) uses code which basically boils down to:

Here, we first find the instance of the Scraper extension (l. 1). We then add ourselves as observer (l. 2). Finally, we ask to receive notifications for any model changes we may not have received yet. This is useful if out extension is activated after some modeling has taken place. The ModelScraper will simply issue events as if the model was just created, so we do not need to handle this specially.

We can also just use the Scraper to inspect the current state of the model if we do not need live updates. It contains a data structure representing the net elements and allows traversing this structure.

The ModelScraper issues events (subclasses of the class org.cpntools.simulator.extensions.scraper.Scraper.Event class) when a model element is added, changed or removed, and when an arc has changed. For example, to print out whenever a new place has been added, we could (with grave abuse of instance initializers) write something like:

We have already seen lines 3-5. Line 7 checks that the notification comes from the Scraper (here it cannot come from other places, but in general we may use the same Observer for multiple Observables) and has the correct type. If so, we case the passed parameter to an Event (l. 8). We then check the type of the event and that it is about a place (l. 9). If all checks out, we print out a message that a new place was created with a given name.

Extensions can also add new instruments to the GUI. This functionality should be used very sparingly. An extension should rarely add tools, and even if so most likely only one. This is not a carte blanche to spam the user-interface with dozens of instruments of dubious utility.

Instruments are added just like subscriptions and options: using addInstrument. An Instrument takes up to 5 different arguments:

The only required parameter is the name. The name should be short. It is shown in the tool-cell in CPN Tools, and if it is more than 4 characters (5 at most) it is unreadable. It can contain \n for a line break, but at most 3 lines should be shown.

The toolBox is the name of the toolbox the tool should reside in. If it does not exist, it is created, and otherwise the tool is added to the existing palette. It is better to order by functionality than by organization. This mean that if your tool can create things, it should be in the Create palette. It it does stuff to nets, it should be in Nets, etc. Do not put your tools in “My Organization’s Awesome Palette of Tools.” First, that does not show what the tools do, making it difficult to find the tools you need, and the name is far too long. Here’s a couple tools created using this mechanism: 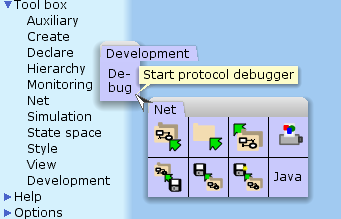 The commands are added using these lines (from different extensions):

Instrument.ToolBoxes contains symbolic constants for the default toolboxes in CPN Tools, making it easy to add instruments to them. The key arguments are just used for identification and can be imitted, in which case a key will be generated. The last parameter used is the tooltip, which should definitely be used given the constraints of the instrument name.

The last parameter, the target, is a list of allowed target types. The default is Instrument.Target.NET, meaning a model, but this can be specialized to be a place, transition, arc, page, auxiliary graphics, or a combination thereof.

When an instrument in invoked on a suitable target, this is also converted to a notification, this time with a org.cpntools.simulator.extensions.Invocation as parameter. If we wanted to print out all places and transitions when clicked, we could do this: