This video has been making its rounds a year ago or so.  Now it’s getting its second wind.  It seems horrible (if you’re a socialist), but let’s endeavor my favorite hobby: fact-checking:

The video shows some charts, first how people think wealth is distributed, how they think it should be distributed and how it is actually distributed: 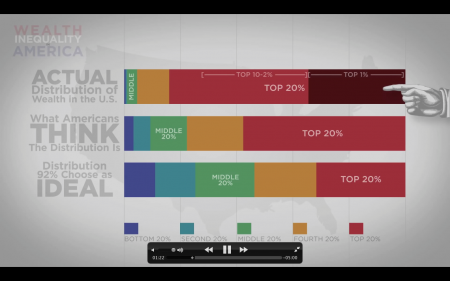 Then to visualize this, it shows figures of how all money in the US would be distributed according to this: 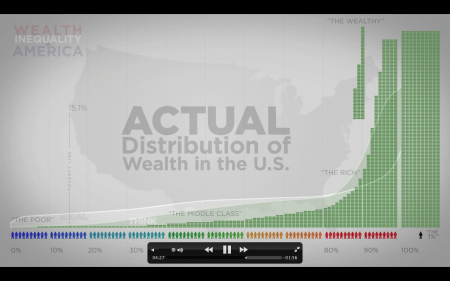 Without even diving into whether this is good or bad, let’s just focus on the four very wrong things with this.

Of course, I am cheating here by assuming the wealthiest 20% all get the highest salary and the poorest 20% all get minimum wage, but this is to some immeasurable extent offset by the fact that some get under minimum wage (children, people not in job, etc.) and some rich people do not just get salary (they own their own company making much more, etc.)

When represented like this differences seem much larger than they are, which causes people to tend towards something much closer to communism than the speaker jokingly suggests.

While the speaker generally mentions wealth, he also uses terms like “taking home,” hinting that this is the spread of income.  It is not. It is wealth.  This means that if you bought a house, the housing market crashed, your net wealth is negative: your house is worth less than your mortgage.  While you are technically insolvent, you may still pay your bills and live decently with a decent salary.  On the other hand, the late Steve Jobs at his death earned approximately $6.5 billion worth of stock in Apple and Disney, yet only got a yearly salary of $1 (and a ton of warrants for tax reasons).

Owning stock in a company is also not the same as money.  You cannot just sell the stock (the value will plummet) and you cannot freely spend it.  The value is based on a perceived earning and is largely speculative.

I decided to try and check if the video was cheating in it’s representation.  I find that videos like this typically are.  This one in not too bad, but it is consistently cheating to promote its agenda.  I decided to measure the distribution of wealth according to the first figure (measured by how many pixels wide each bar was) and the distribution of wealth according to the stack of money (counting each bill).  This gave me this:

At the top, we have the distribution according to the “number of pixels in the top figure” and at the bottom we have the wealth depending on the number of notes in the second.  We see that in all cases are the poorest 20% given a smaller amount of wealth in the “pedagogical” chart at than they are in the already misleading top chart.  In the first and last case are the richest 20% given more money than in the top chart.  This supports that the socialist wet-dream “ideal” scenario has larger incentive to work (is less equally distributed) and that the richer in the last scenario are richer.

Of course, no matter how you look at it, the poorest 20% do not have a lot, but the fact that they are in the positive make them much richer than many others.  Remember, this is is net worth not income.  The net worth is calculated by taking the $54 trillion form the video, dividing it by 314 million citizens in the US and multiplying by the percentage.  Most of Africa has a gross national income of less than $750 per year per person, making the net worth of the 20% poorest more than one year of income for the average in Africa (ref).

Depending on how much in detail you looked at the table above, you notice another huge misrepresentation.  The total stack of money distributed grows from roughly 2000 in the first two figures to roughly 3000 in the last one.  This makes the comparison shown completely irrelevant and makes the richest seem much richer.

This video has all the signs of alarmist propaganda: it has a concerned voice “just laying out the facts,” it name drops a researcher, it dumbs down everything to pretty graphics, said pretty graphics are wildly manipulative, and even internally inconsistent.  Furthermore, the video talks about wealth, but does not describe that this is not the same as income and even tries to hint it is talking about income.

The video does not address whether the larger spread is good or bad.  Is equality preferable to inequality if it means everybody is worse off?  My super-scientific poll from 30 months ago shows that 86% prefer a larger spread when it means everybody is richer.  While that chart may seem manipulative, it is actually not.  Maybe you are just too used to see manipulated figures that seeing one that is not looks wrong?

All in all this seems a bit like when I debunked an environmental nutjob: concerned voice, simplistic presentation, and faulty argumentation.  To tie the two together, enjoy my insightful post showing how ecomomical equality is bad for the environment.