Nobody wants to hear more about it!  It’s polluting the news worse than any soviet mid-70s coal power plant could ever pollute the air.  I’m, of course talking about the climate conference (yeah, not gonna dignify them by a link) thats causing criminality to go unpunished in the civilized parts of Denmark thanks to all the terrorists intending to ruin Copenhagen “in the name of the climate”.

One of the stupid idea associated with the conference is the “Earth Hour”, the wrong and dumb idea that turning off lights for an hour will conserve electricity.  Not only is the amount of power used to light the world nothing compared to the amount of power used for virtually anything else.  So, unless you don’t live anywhere, don’t eat or breathe, I don’t fucking want to hear about conserving power by turning off the lights for an hour.  Also, since the power plants cannot produce less power for the single hour, the production is toned down in the one area where it is possible: by turning off the wind mills.

The “Earth Hour” people thing that by a symbolic act they can get the attention of people, and they even have a ballot on their homepage (no linkie for them either), allowing you to vote for or against Earth: 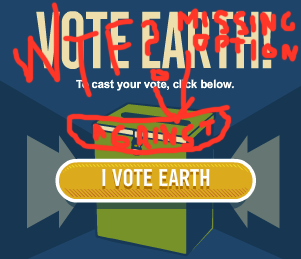 See what I did there?  There is no “I Vote Against Earth” button.  Did they forget it or are they so afraid of the outcome that they simply didn’t add one?  Anyway, during this “Earth Hour”, I decided to turn on all light and write a sour message to the people behind the Earth Hour to ask why that was:

I heard about the Earth hour and made sure to turn on all my lamps and even went as far as removing an energy-efficient bulb from one lamp, replacing it with a more power-hungry one, just to be able to use that extra power for just an hour.  I did this, symbolically, just one week before the Earth hour.

I did this because turning off lights is at best useless, and at worst may cause damage to power-plants, thereby using more energy. Furthermore, the power used by lighting is negligible compared to almost everything else.

Out of boredom, I sat in my well-lit apartment and happened upon your web-site, and saw the ballot on the front page, allowing me to “Vote Earth”. I did not, however, see a “I Vote Against Earth” button. Did I do something wrong, or is the ballot rigged? could you please explain how your ballot has any relevance when you do not actually confront the issue, but only want to make symbolic actions with no relevance.

Also, can you in any way convince me to actually turn off the lights next Wednesday at this hour?

Please note that I intend to post about this on my web-site (https://westergaard.eu/2009/12/i-vote-against/) as well as any response by you (which you implicitly grant me permission to do by responding). If you neglect to respond, I intend to ridicule you.

I’m looking forward to their response.  Unless, of course, they are too afraid to answer a person that does not agree 100% with their ideals and agenda…

One thought on “I Vote Against!”