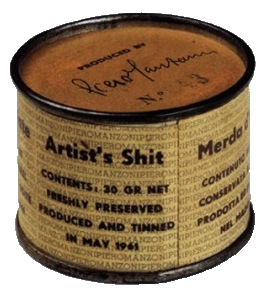 In this post I am in no way trying to define art – whenever I write art, you’re welcome to read almost anything you want, be it music, paintings, crap in a can, soccer matches, movies or something completely else.

It’s no secret, I’m not for a large state supplying everything and demanding huge taxes in return. To paraphrase from memory Penn & Teller from their excellent show Bullshit!: “Taxes is when the government takes you money and spends it on something you would never finance yourself.”

With that out of the way, let’s look at state financed art.  I think it’s safe to say that artists fall into one of more of the two categories:

It may seem like an over-simplification, but it is really not.  Either you make art because you like to do so (2) or you don’t.  I then add the implication that there must then be some other reason, and I’m guessing that it must be to make a buck out of it (1).  Of course it is possible to be in both categories (if you like making art and people like your art, they may pay you for your art).  I doubt anybody falls into category alone (why would you do a job you didn’t like one bit?), but there are many in category 2 without touching category 1 (people who knit, write, sing, … for their own enjoyment).

We can safely disregard the simplified version of the argument, as there will always be people in category 2, and they will make art regardless of they make any money on it – they make it because it makes them happy, not because it makes other happy.

Now let’s assume there was no state-supported art.  The argument is that there will then only be pop-art.  Naturally, there will be commercial art, because artists that are popular enough to sustain themselves can still continue doing that.  Case in point, Britney Spears is responsible for a several billion industry (in any currency).  She makes music that sells well, she holds concerts that are well-attended, there is a whole industry just waiting to take her picture having a smoke or eating a burger, there is a merchandise industry, etc.  Another example is soccer, where teams trade players for several millions and even billions, all paid for by fans of the sport.  As a last example, the publishing industry has been publishing books, making loads of money on famous authors.

So, with no state-support, there would definitely be art.  Now we just have to show there would also be produced sufficient of more narrow art.  The argument is that unless we pay artists, they will not produce any art, and only popular art would be produced.

Okay, let’s assume we have an artist, who wants to do art (category 2), but doesn’t have time because he has to work a job to sustain himself.  Well if he’s solely in category 2 but nobody wants to pay for his art, maybe he’s not as good an artist as he thinks himself…  Maybe he should just recreationally make his unsellable art and stop trying to sell it.  If I claim to be a mason but has the knowledge I have of masonry (i.e., nearly none), and all my houses fall down, but I really like to build houses, nobody should be forced to buy my houses.  Instead, if I really like building houses, I could do that on my own time without bothering anybody else.

Now if an artist makes art that an elect small group actually wants, they are free to purchase said artist’s art.  This would purchase some time off for the artist (putting him to some degree into category 1), allowing him to produce more art to the enjoyment of the few actually taking a liking.  It even makes sure that enough art will be produced to all interested (as more sold art will allow the artist more time to produce).

So now we make sure that nobody produces art that nobody wants unless it’s for their own entertainment on their own time, there will produced exactly enough niche art to satisfy everybody interested, and – naturally – there will be produced enough pop-art.  In principle, everybody should be happy.

Now there are a couple concerns, people may put forward, so let me prematurely address them.  The objections are that not everybody has the money to purchase the art they desire, art should be available to everybody (not the same, I’ll address the difference below), and that this will make artists produce more conventional art in order to be able to fully sustain themselves.  Let’s start from the first, then the next, and so forth until we reach the end.

Not everybody has the means to purchase desired art: Well, every heard of cooperatives?  It works here as well.  The idea is that if more than one person are interested in a common goal, they can work together to reach that goal.  They can join forces 10, 100 or more to purchase the can of crap they have their heart set on, and then share it in some way, either by letting each person have it for a designated period or putting it somewhere they all have access.  It’s a bit like state-sponsored art, except only people that are interested in a certain piece of art have to pay for it.  If you make very little money, this model is also an advantage for you, as you don’t have to pay for crap in a can, but can prioritize to get food instead.  If you really like art, you can consider an extra day of pasta a week or go with a 30″ plasma TV instead of the 43″ model.

Art should be available to everybody: By this I mean that a certain part should not be held by a closed group of people.  Well, firstly, who says that?  Why should it not?  Even today with state-sponsored art, private collectors own certain pieces of art that are not available to the general public.  But, again, if enough people think art should be available, they can form a cooperative purchasing art, making it available to the public – either for free or for a fee.  Even if nobody is interested in forming such a cooperative, but a lot of people are interested in using such a cooperative, I can guarantee that there will be a capital fund interesting in purchasing art and making it available for a fee.

This model will make artist produce more conventional art: I doubt that.  There can only be so many Britney Spearses (in fact, there can be only one).  If artists divert towards more popular art in order to increase their potential clientele, they will most likely enter into a more competitive area with lower prices, requiring more work to sustain themselves.  Furthermore, if people actually were interested in their more niche art, there will now be a gap left behind, and most likely somebody to fill the void.  I see no problem if an artists produces as much niche art as they can sell and then have a day job of producing landscape and portrait pictures.

All in all, the model of no state-sponsored art would in no way produce less art that anybody actually cares about.  It would allow all the ways of enjoying art we have today.  It would have the enormous benefit that you’d only have to pay for art, you actually like, and the state wouldn’t take your money to purchase houses that fall down.  Maybe, the more direct involvement would even let people get more interested, increasing the amount of art produced?

And all we have to do is stop doing stupid things; cut the state support to art and let us spend that money ourselves.